Mixed Linear Models module of the GAMLj suite for jamovi 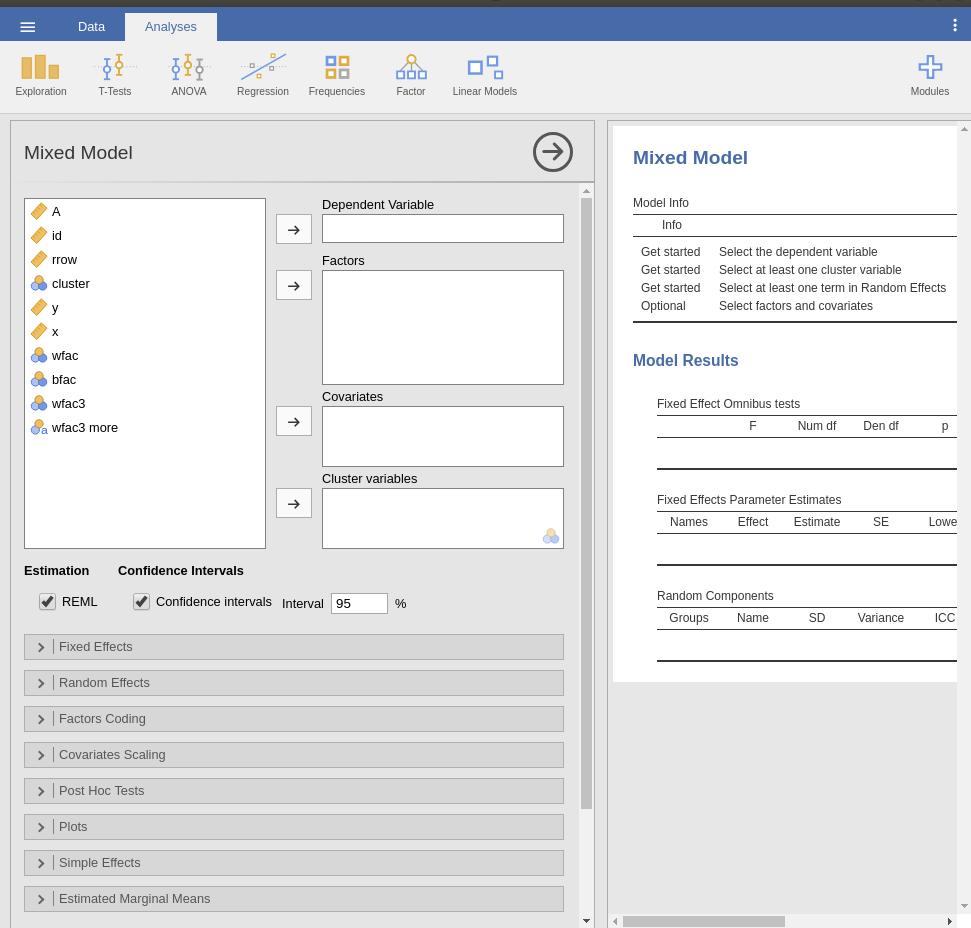 The module estimates a mixed linear model with categorial and/or continuous variables, with options to facilitate estimation of interactions, simple slopes, simple effects, post-hoc, etc. In this page you can find some hint to get started with the mixed models module. For more information about how to module works, please check the technical details

The module provides a parameter estimates of the fixed effects, the random variances and correlation among random coefficients. 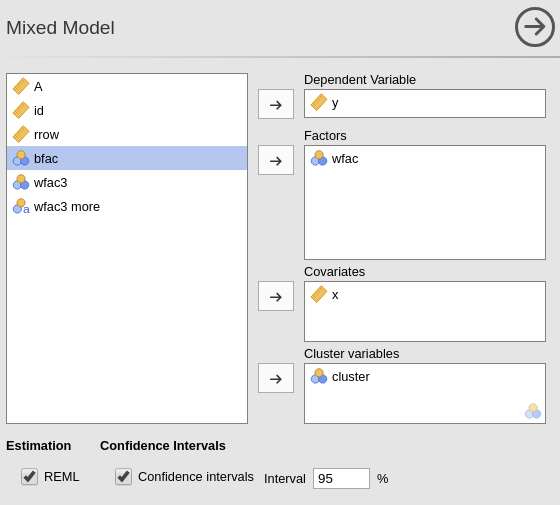 The grouping variable is simply set by putting the corresponding variable(s) into cluster. In this version, multiple clustering variables are possible, but not combinations of classifications ( see Technical Details ).

Confidence intervals for the parameters estimates and REML or ML can be chosen.

The actual estimation occurs when the dependent variable, the clustering variable and at least one random coefficient (random effect) has been selected. 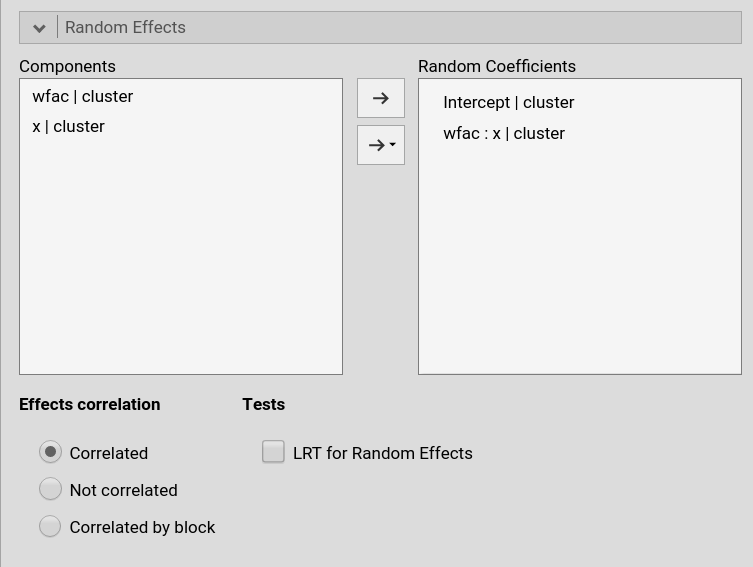 Random effects across clustering variables are automatically prepared by the module following R lmer() standards: term | cluster indicates that the coefficient associated with term is random across cluster.

By default the module assumes correlated random effects. All the effects varying across the same cluster variable appearing in the Random coefficients will be correlated. To obtain a variance component model, select Not correlated. A custom pattern of correlation can be obtained by selecting Correlated block. For instance, in Fig. below, a custom structure has been defined by allowing the intercept and the effect of x to be correlated, whereas the effect of wfac is independent from the others. 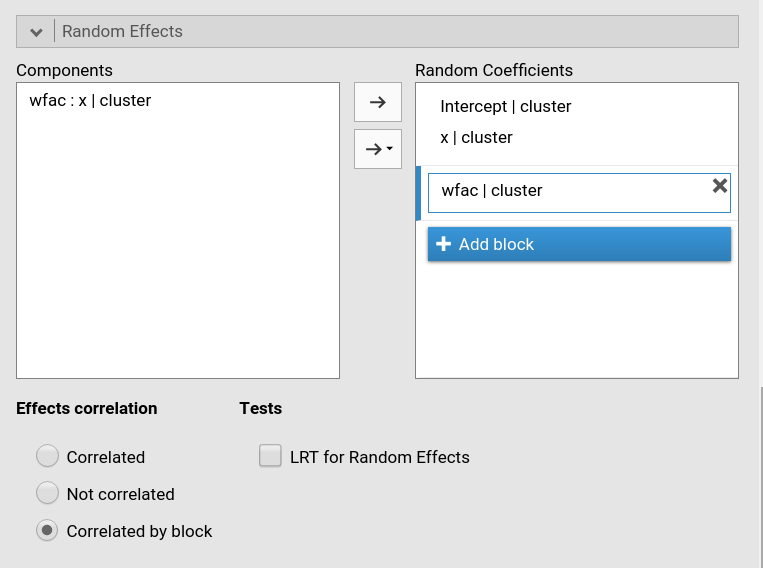 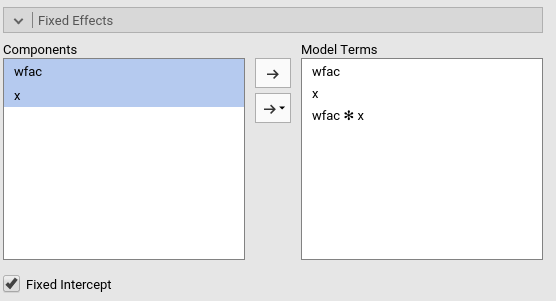 By default, the model fixed effects terms are filled in automatically for main effects and for interactions with categorical variables.

Interactions between continuous variables or categorical and continuous can be set by clicking the second arrow icon. 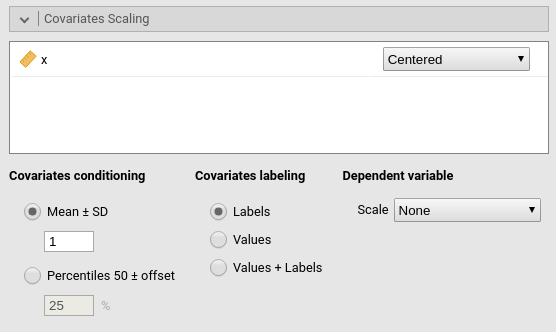 Continuous variables can be centered, standardized, cluster-based centered, cluster-based standardized, log-transformed or used as they are (none). The default is centered because it makes our lives much easier when there are interactions in the model, and do not affect the B coefficients when there are none. Thus, if one is comparing results with other software that does not center the continuous variables, without interactions in the model one would find only a discrepancy in the intercept, because in GAMLj the intercept represents the expected value of the dependent variable for the average value of the independent variable. If one needs to unscale the variable, simple select none. 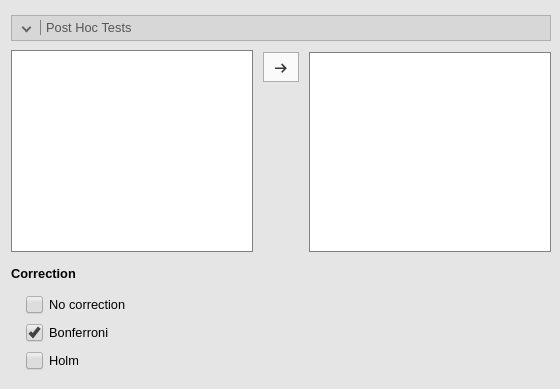 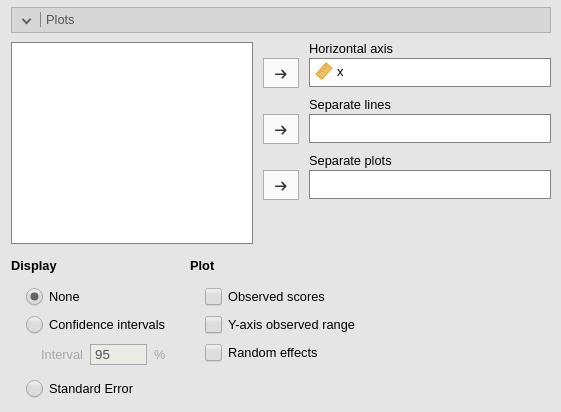