In this example we tackle a moderated regression analysis with simple slopes analysis and simple slopes graphs. Data are from Cohen et al 2003 and can be downloaded here. A detailed comparison between the following results and results obtained with other software (SPSS, PROCESS, and R) can be found in Rosetta store: moderation.

The research is about physical endurance associated with age and physical exercise. 245 participants were measured while jogging on a treadmill. Endurance was measured in minutes (‘yendu’ in the file). Participants’ age (xage in years) and number of years of physical exercise (zexer in years) were recorded as well (in jamovi Exploration -> Descriptive) 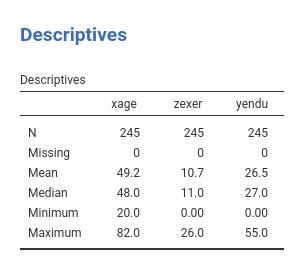 The researcher is interested in studying the relationships between endurance, age, and exercising, with the hypothesis that the effect of age (expected to be negative) is moderated by exercise, such that the more participants work out (higher levels of exer) the less age negatively affects endurance.

jamovi GAMLj module for GLM requires to set the variables in the right field depending on their role in the model and their type. 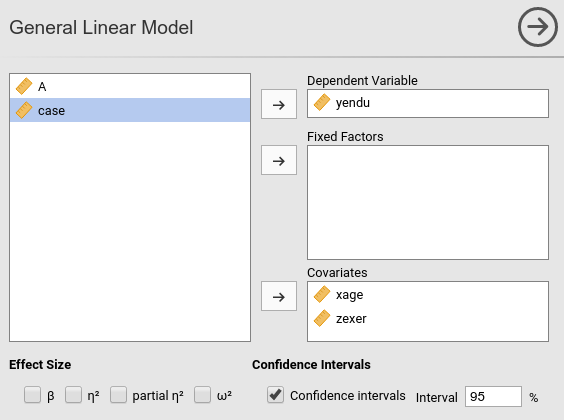 Thus, we push yendu in the Dependent Variable field and both xage and zexer in the Covariates field, being both variables quantitative.

As soon as the variables are set, jamovi fills in the tables in the output panel with the estimation results. However, it is worth noticing that the statistical model has been defined by default by the software: We can see that in the Model tab. 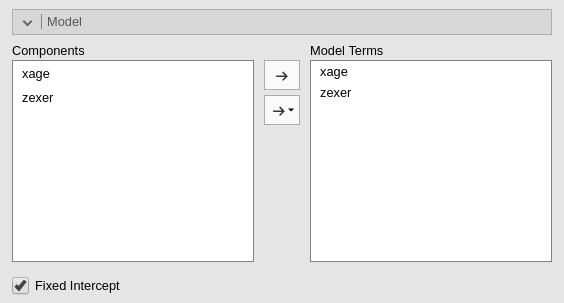 jamovi, following a somehow old tradition established by SPSS, automatically includes continuous independent variables in the model without their interaction. For categorical variables the default behavior is to include both main effects and interactions.

Thus, the model we are estimating now is yendu~xage+zexer. 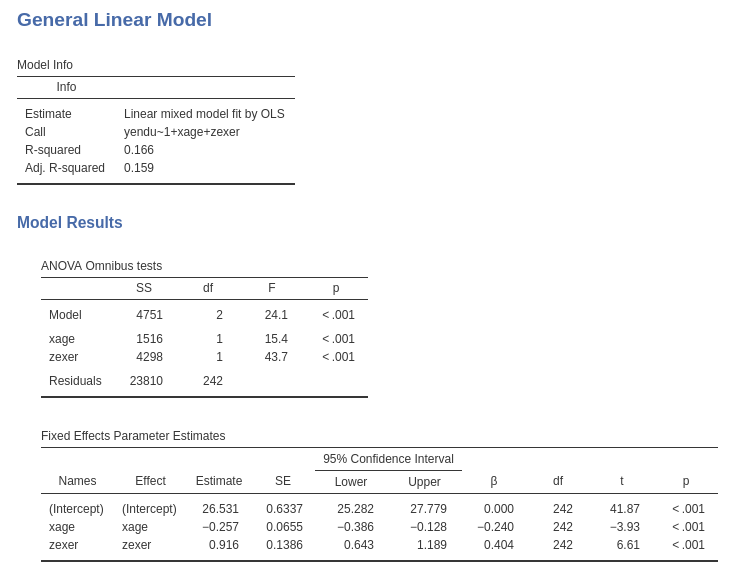 Results show that both age and exercising have an effect on endurance while keeping constant the other variable. The Model Info table shows the R-squared, R-squared=.166 (adjusted .159), indicating the the two independent variables together explain around 16% of the dependent variable variance.

For each coefficient the confidence interval is also reported.

In general, we want to report standardized effect size indexes, for the sake of comparison, meta-analysis, APA task forces (and probably the Marvel Avengers league). jamovi GLM offers a plethora of them:

By ticking the options in the variable definition panel, we obtain the ES indexes as follows. 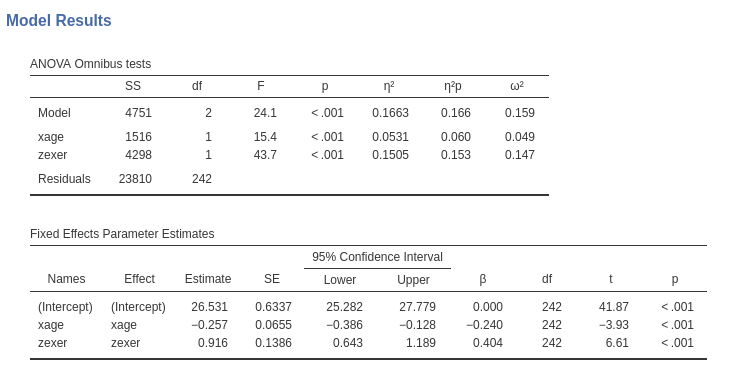 The interaction is pushed in the Model Terms by selecting the variables on the left side and clicking interaction in the “arrow” cascade menu.

Let’s us first focus on the parameters estimates, the B coefficients. 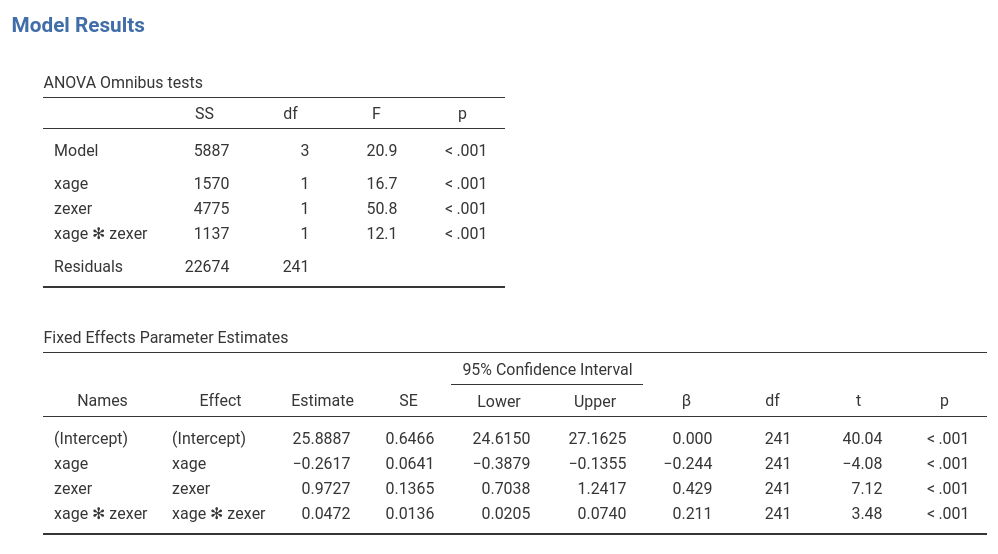 One can also report the betas (last column in the Model Coefficients table). Please notice that in jamovi GLM, the estimates of the betas are correct also in the presence of the interaction, because the variables are standardized before the interaction term is computed.

jamovi GLM produces both the F-tests and the parameter estimates for the simple slopes. We focus on the latter table now. 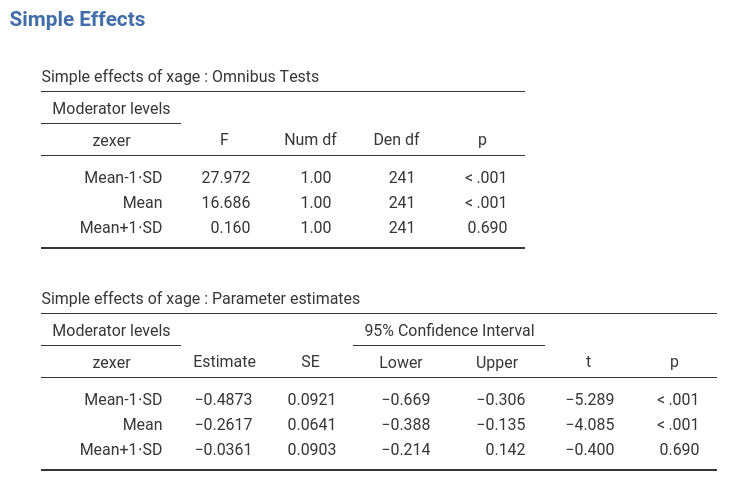 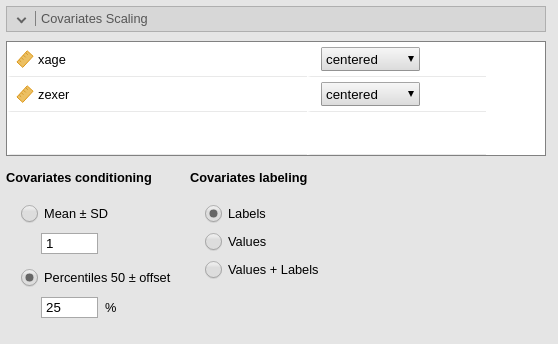 The simple effects are now changed, because they are estimated for a different set of values of the moderator. 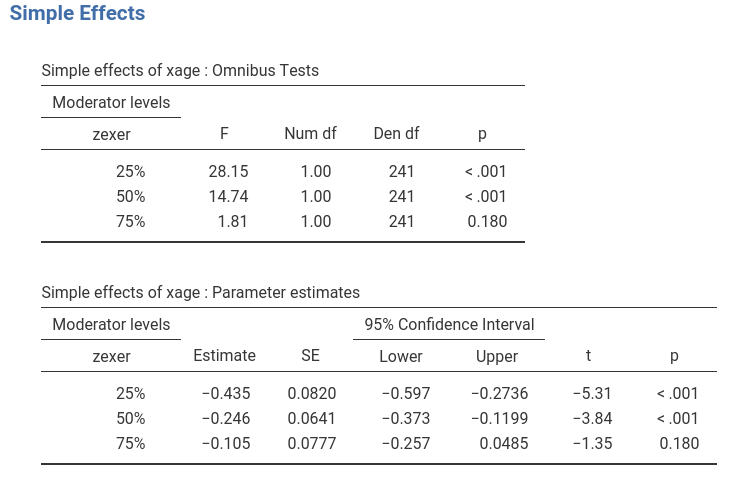 One can further tweak the appearance of the tables by selecting different value/labels options in Covariates Scaling panel. For instance, by selecting Values + Labels one obtains detailed labeling in the tables. 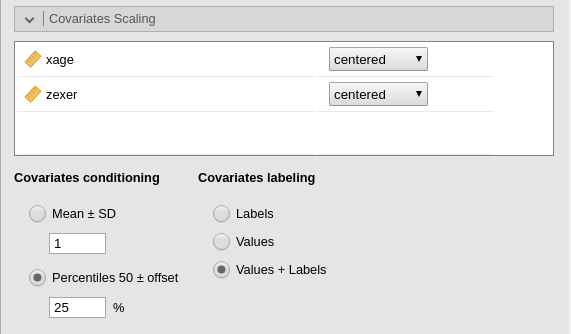 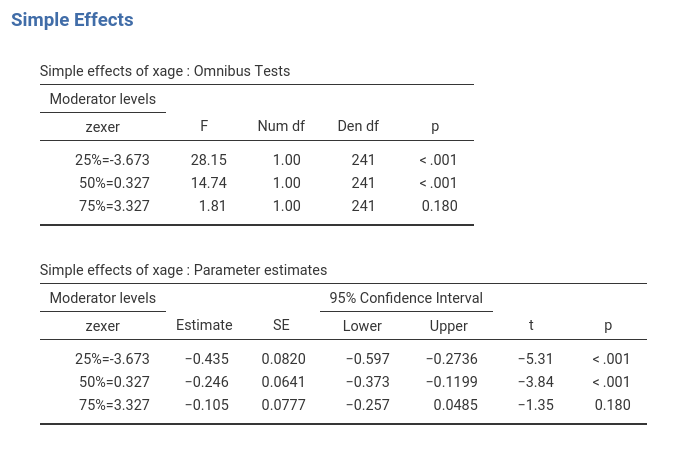 We can get a clear picture of the interaction by asking for a plot. Also the plot module takes care of centering the variables in a way that makes the plot clearly understandable. 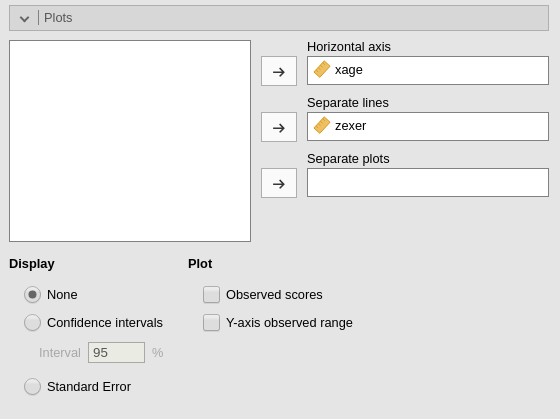 The command plots the effect of the Horizontal axis variable for three levels (decided in Covariate scaling) of the Separate Lines variable. 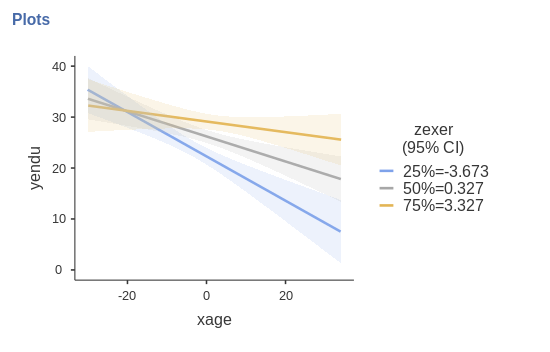 The nice plot we get shows the simple effects (simple equations to be precise) with the prediction confidence intervals indicated by the colored shades around the lines. If needed, the confidence intervals can be substituted with the standard errors of the estimates or they can be removed completely.

Finally, in order to give a more honest account of the model fit, we can visualize the simple slopes over the the actual data. 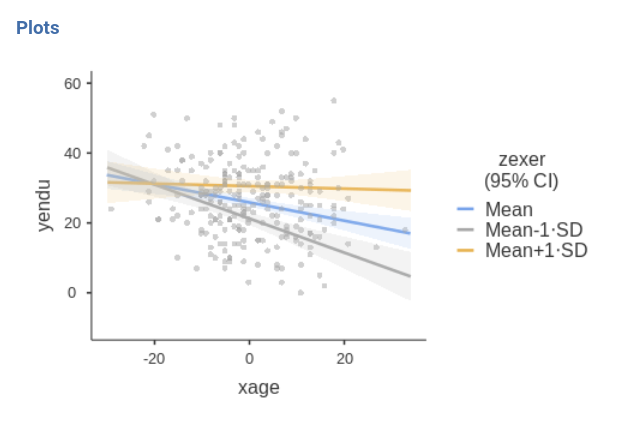