We run the analyses with the GAMLj module in Jamovi. One can follow the example by downloading the cvs file and open it in jamovi. Be sure to install GAMLj module from within jamovi library.

The data are from a idre hsbdemo example. You can find similar analyses in pure R and a nice explanation of them at the UCLA idre web page.

The cross-tab of frequencies of participants combining social economical status and the outcome program is in the next table (in jamovi frequencies -> Contingency tables) . 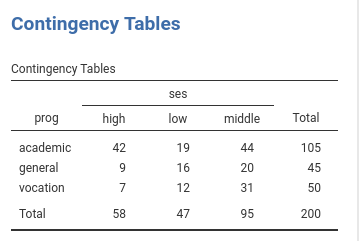 The descriptive of the continuous independent variable write are in the table. 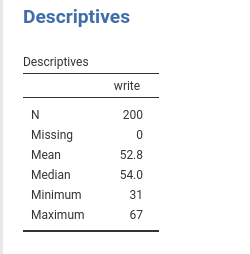 We want to understand if choosing a particular program out of the three available (general program, vocational program and academic program) can be linked to the student ability to write (write) and her/his social economical status. Because the two predictors can be correlated, we want (ultimately) to run a single model (multiple regression) such that the effect of each predictor is estimated while keeping constant the effect of the other, and a possible interaction can be assessed (moderated regression). We will run some preliminary models to warm up.

To be clearer, let’s consider the frequencies of the dependent variable: 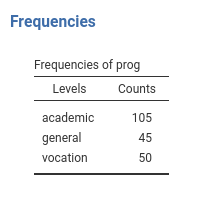 To simplify the interpretation, we can always look at the plots of the effects. In jamovi GAMLj the plots are on the probability scale, thus very easy to interpret: they show how the probability of each program changes for different levels of the independent variable.

The choice of the reference group is statisticaly immaterial, but can be adjusted for interpretational purposes. Here we use academic because in jamovi GAMLj the default is to set the first group as the reference group: the prog variable is a string variable, thus the groups are alphabetically ordered. If one needs to change the reference group, a different coding of the dependent variable groups can be used.

Let’s start with predicting prog with the social economical status. In GAMLj generalized linear model we select the multinomial model, push the prog variable in the Dependent Variable field and ses in Factors. 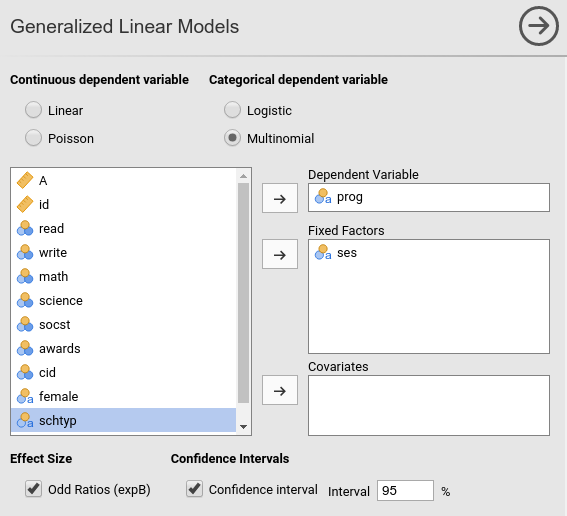 As soon as we fix the variables, the results are there, with the first table showing some info about the model.

Here we can outline the R-squared, that gives information about the goodness of fit of the model (see technical details for more info). Our error of approximation of the data decreases of 4% thanks to the ses variable. Put it in another way, our ability to predict prog increases of 4% thanks to ses over using only the observed probabilities.

The omnibus Chi-Squared test tests the null hypothesis that the probabilities of prog choice are the same for all ses groups. Based on the p-value, our results seem rare under the null hypothesis, so we can deem the effect of ses as statistical significant. Let’s go straight to the interpretation of the results by visualizing the effects.

Ask for the plot in the Plots panel:

and see what we obtain: 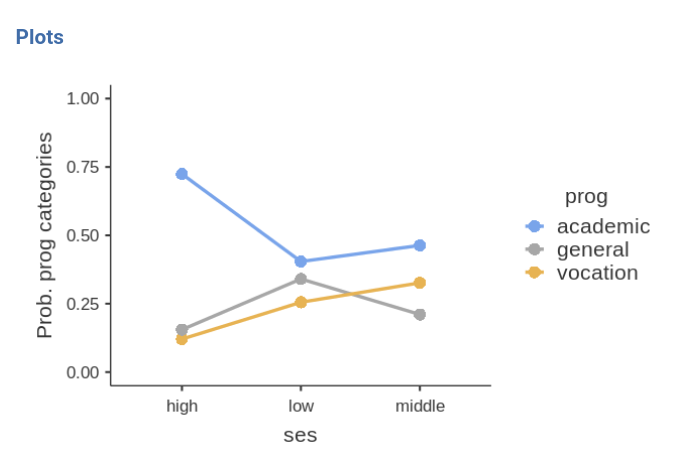 The effec of ses is due to the fact that high ses group is much more likely to choose the academic program (prog=1) over the other two programs, while low ses and middle ses choose the three programs with more or less the same probability. The effect is not strong (recall R-squared=.04), but is at least visible in the plot.

An interesting note can be made for the omnibus test Chi-squared=16.8, p=.002. This test is equivalent to the standard Chi-squared one obtains by running a chi-squared test on the contingency table prog X ses. In fact (in jamovi frequencies -> Contingency tables) 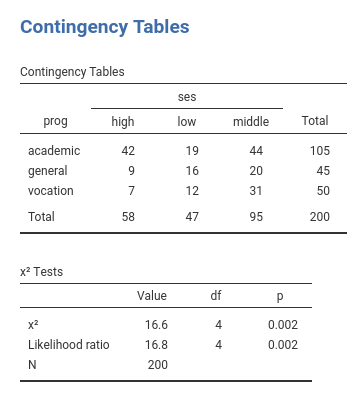 The standard chi-squared test is 16.6, but the Likelihood ratio is 16.8. QED, the multinomial omnibus test for categorical independent variables is exactly the chi-squared test obtained on a cross-tabs, only estimated with the maximum likelihood method. Accordingly, one can say that the frequencies of the cross-tab prog X ses are not independent.

If one needs (and seldom one does in these cases), one can look at the model coefficients, the regression coefficients.

Skipping the intercept (recall that nobody interprets the interaction :-) ), the first coefficient, ses1 is associated with the dependent variable contrast general-academic as predicted by the contrast low ses versus the average of the sample (high, low , middle). The exp(B) is 1.938. This means that the odd of choosing general over academic for people of low social economical is 1.93 times higher than for the average person in the sample, and this effect is statistically significant (z=2.429, p=.001). Indeed, this is what the plot actualy shows.

The other coefficients can be interpreted along the same line.

Let’s include write as independent variable and see the results.

Now we have two omnibus tests, indicating that the ability to write has a stistically significant effect on the probability of choosing a program, while keeping constant ses. The analysis also confirms an effect of ses, also when write is kept constant. As before, we can interpret the results by looking at the probability plot. 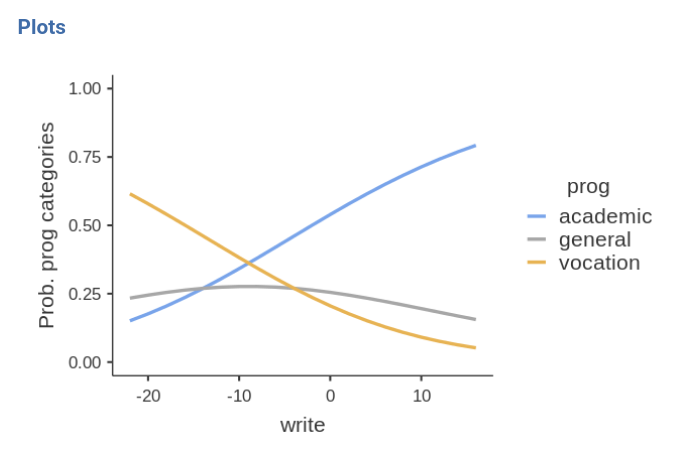 Please notice in the plot that the independent variable write it is centered to its mean. This is a default of jamovi GAMLj in order to avoid unexpected results when interactions and other complex effects are estimated. However, it is only a default setting, so we can change it as we’re pleased.

By going to Covariates scoring tab, one can choose not to center the variable.

Obviously, the results are not different, but the plot x-axis looks nicer now. 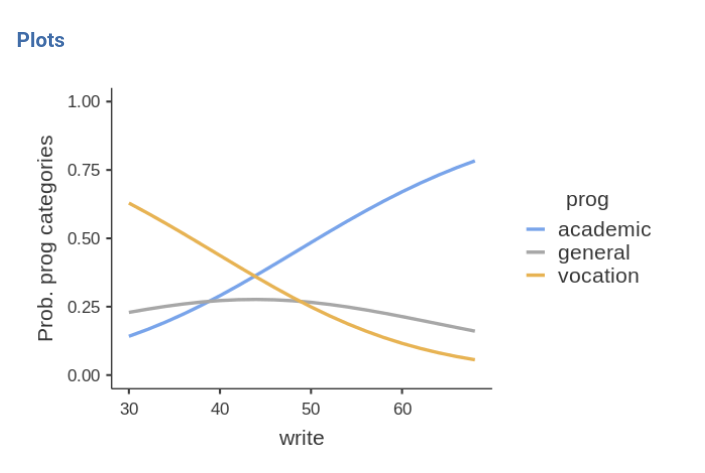 A question we can ask is whether the effect of writing abilities may be different at different levels of social economical status, thus putting forward a moderation hypothesis.

After setting the write covariate back to centered, we can go to the Model tab and push the interaction term to the right field. We need this because GAMLj abides by an old rule of not estimating by default the iteraction between continuous and categorical variable (this default may change in future releases). 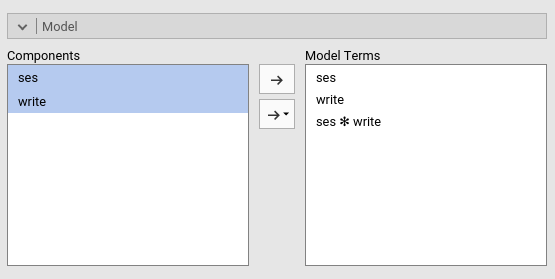 Results show very weak support for an interaction, because the Chi-square is low (3.46) and the p-value high (.484). This means that the probabilities profile along the write scores are not substantially different across social economical groups. We can verify that by eyeballing the plot of probabilities broken down by ses groups. 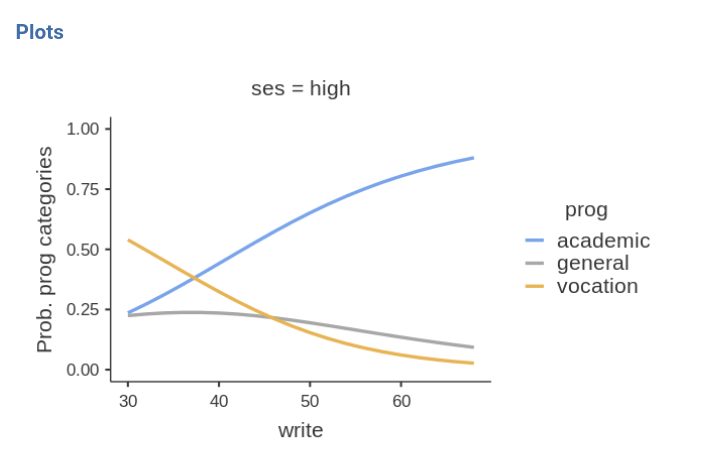 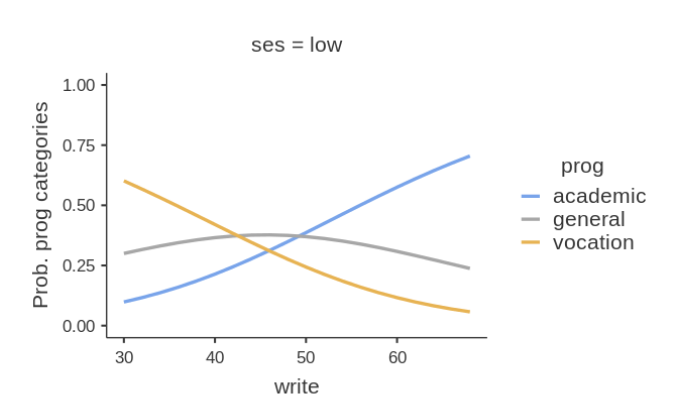 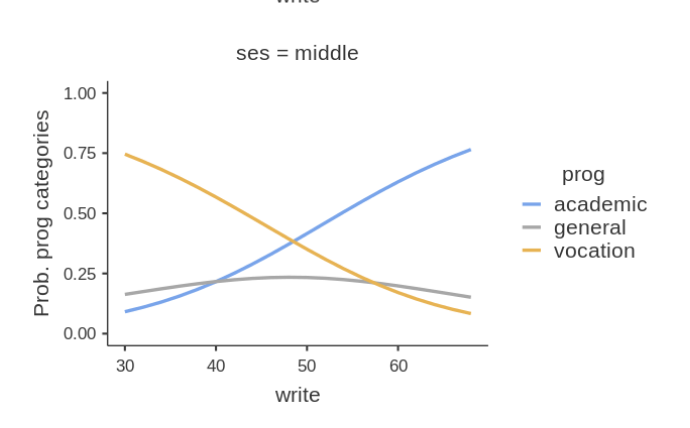